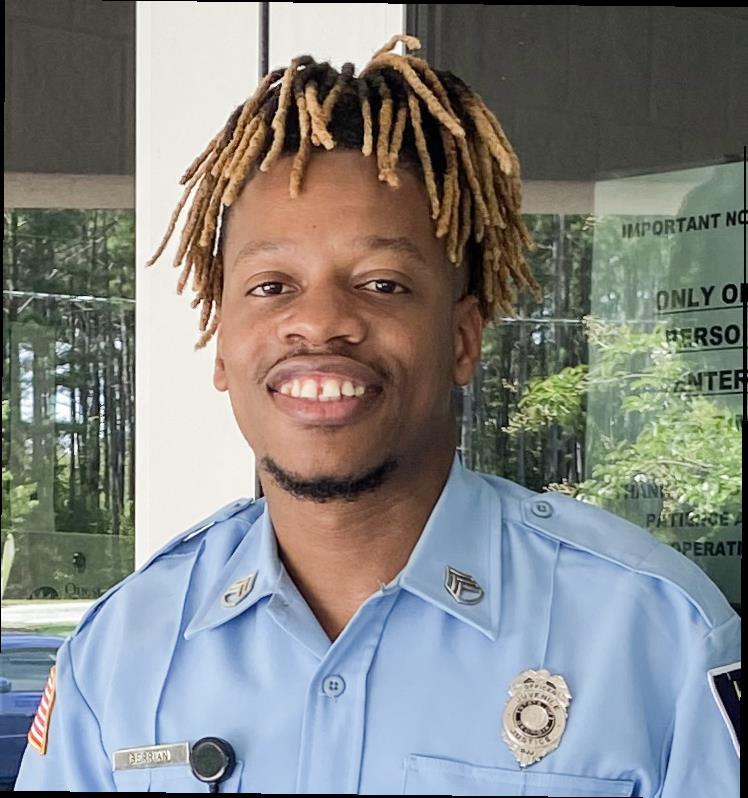 The road to becoming a leader often involves many twists, turns and unforeseen obstacles. Leaders are not born, they are developed through positive and negative experiences. Having the character to get up after falling or failing is a trait that many leaders share.

A good example of the long road to success can be seen in the story of Michael Berrian, Jr. Currently a Sergeant at the Cadwell Regional Youth Detention Center (RYDC), Michael Berrian started his career at the Macon Youth Development Center (YDC) nearly two years ago.

“Macon RYDC is and will always be “HOME” and very dear to my heart,” Berrian said. “I would like to thank Director Romenski Williams for giving me a chance and mentoring me along the way. It was an honor to work alongside some great people at Macon RYDC. I’m so excited about being promoted from JCO to Sergeant and moving to Cadwell RYDC, it was a fresh start for me. Thank you to Mr. Gary Darrisaw and the team at Cadwell RYDC for accepting me as a Sergeant and giving me my first opportunity to be in a leadership role.”

Berrian’s first exposure to the Macon RYDC was when he was incarcerated there eighteen years ago.

Growing up in Macon’s Pleasant Hill neighborhood, Michael Berrian, Jr.’s childhood was nice, living with his very devout mother. Unfortunately, in his own words, Michael “fell in love with the world” and by the age of 16 was smoking marijuana, involved with gangs, and selling drugs.

“When I was a teen, I dealt with a lot of peer pressure and had issues with wanting to be accepted by all the wrong people to the point that I was willing to do almost whatever for people to like me”, said Michael. “That put me in a position to do things I wouldn’t normally do, just so that my peers wouldn’t think I was afraid. Honestly, I was afraid. I was afraid to be a leader, so I followed the crowd and got myself in a lot of trouble doing so.”

This hard headed behavior eventually led to a robbery spree that ended with four felony charges for Michael Berrian, Jr.  and ultimately a ten-year sentence with four years scheduled at the Department of Corrections.

However, after three years of incarceration, Michael Berrian, Jr.’s path to maturity and leadership began in earnest with humility and a spiritual awakening.

“God spoke to me and showed me that the life I had chosen to live was in opposition to the way He desired for me to live my life,” according to Michael. “I asked God to forgive me and that’s the first day I knew I had been forgiven for all the wrong I did. I began to read the Bible, pray, and surround myself with other people who was following Jesus Christ as well. That was the beginning.”

Like other leaders, Michael Berrian, Jr. also accepted the help of others and saw the opportunity for redemption while at DJJ.

“There were specific individuals that helped me to see my path, but they weren’t officers. They were inmates and volunteers. My mom played a big part too, she prayed for me and sent me scriptures through the mail. I used to read those scriptures almost daily. My mom taught me about God when I was younger and when I got older, she continued.”

With a true understanding of self and direction, Michael was able to push forward to become the person that he always was and wanted to be. Through good work and deed, the ten-year sentence was reduced to three years. Soon Michael was out of DJJ custody and motivated to share his experiences to help others.

“Working at a Hephzibah Children’s Home (HCH), a group home in Macon, I realized I wanted to work with incarcerated youth. HCH housed youths from DJJ facilities. To me, it was like a “Halfway House” for juveniles. While working with these youths, I realized how much a lot of them were like me when I was younger. I was drawn to “the bad kids” and I found myself talking to a lot of them about life and about being a better person. Some of the youth had children and I would talk to them about keeping themselves in a position that they could always be there for their children which included the importance of staying free. To a lot of them, I became like a father-figure or big brother. This inspired me to want to continue working with youth, especially “the ones like me”.  After that, I enrolled into the Criminal Justice program at a local college in Macon with the desire to be a Juvenile Probation Officer and to work with DJJ youth.”

“Mr. Berrian came to me as a cadet and stated that he was worried about his background clearing the Georgia P.O.S.T. standards, which was necessary to attend B.J.C.O.T.,” said Director Romenski Williams, Michael’s mentor. “I told him that because I was so impressed with his character, positive attitude and desire to be a beacon of light for our youth, I would do all I could to have him be a part of the Macon RYDC team whether it be security, non-security or volunteer. I also told Mr. Berrian that due to him having gone through some of the same situations as some of our youth at the Macon RYDC, that he could become a living, breathing example of what you can do after you make bad decisions, get in trouble but refuse to let those mistakes and decisions define the rest of your life.”

Michael is now inspired to continue the journey and make the most of his time working within the confines of juvenile justice.

“I desire to continue to grow within the agency and be an example to follow. I’m a leader at heart, but more than that I am a server, and I plan to serve DJJ until God comes for me. As far as my future goals, I would like to be a Juvenile Probation Officer, preferably in Bibb County, one day.”

“I want to thank every employee of DJJ, especially those in blue (the JCOs), the real heroes and hardest working people within the agency. If you’ve never heard it or haven’t heard it in a while, I appreciate you and everything you do to make sure our facilities are secure and run properly. Whether you know it or not, the youth in our care are impacted by your presence. We will save many, just keep hanging in here and ‘be the change you want to see’. You never know who they may turn out to be. Inmate one day, officer the next.”